Lord of Shadows by Cassandra Clare

Oh why? Why did I set myself up for this torture rereading this?
There’s clearly something wrong with me.😣

I knew how it was going to end and even prepared myself for the ending, but I still couldn’t help having my heart break. I feel dead on the inside.

Clockwork Princess and Lord of Shadows are the saddest books I’ve ever read.

I seriously believe that Cassie secretly has a job as a professional torturer, laughing in delight as she watches her readers suffer. Nobody can tell me otherwise.😭

All I can think about right now is THE BLACKTHORNS🥺🥰😭. Each and every one of them have buried themselves into my heart. What’s there to hate about the family? They don’t deserve to deal with the stupid Cohort and Clave. Why is everyone always trying to hurt them?!?!😭😭😭

Now one of my favourite parts in this book was Mark still adjusting from his time in Faerie.😂 It was just too funny xD. Especially the stupid stuff he did.

“I suspect I would have the same problem,” Mark said, eyeing the fish. “It is too bad—I was going to name it Magnus, because it has sparkly scales.”

“I suppose I had better let him go free,” Mark said. Before anyone could say anything, he made his way to the railing of the pier and emptied the bag, fish and all, into the sea.

“Does anyone want to tell him that goldfish are freshwater fish and can’t survive in the ocean?” said Julian quietly.

^Rest in peace Magnus, The Goldfish😢

“Remember, Mark is in charge.”

“Does he know that?” said Livvy.

Julian sought Mark in the crowd on the steps. He was standing with his hands behind his back, exchanging a mistrustful look with a carved stone gnome. “Your pretense does not fool me, gnome,” he muttered. “My eye will be upon you.”

Emma and Mark’s good-bye had been bizarre, to say the least. Emma had given him a quick, absentminded hug before descending the stairs; Mark hadn’t looked bothered until he’d noticed Julian and the others staring at him. He’d run down the steps after Emma, caught her hand, and spun her to face him.

“It is better that you go,” he said, “that I might forget your fair, cruel face, and heal my heart.”

Emma had looked stunned; Cristina, saying something in a low voice to Mark that sounded like unnecessary, had hauled Emma off toward the car.

^And then you have Mark being such a bad actor.🤣

He’s so lovable.🥰😂 And I totally love Kieraktina!😍 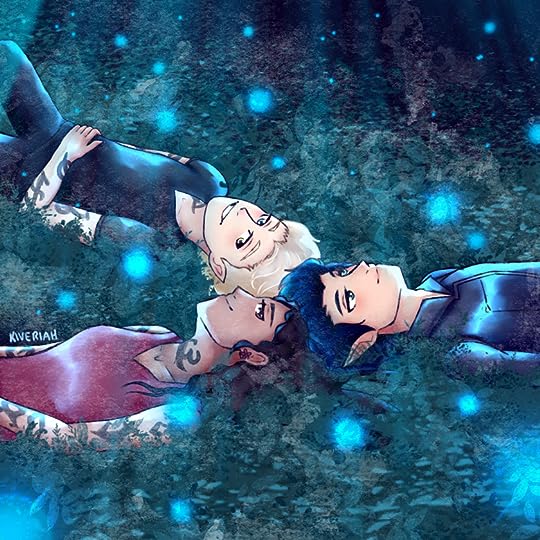 And of course the Gwyn x Diana moments were just so sweet!!! Gwyn has always been one of my favourite faeries. Who knew the Leader of the Wild Hunt could be such a soft boi.🥺🥰

“Providence has brought us together again,” Gwyn said.

“I don’t believe in providence,” said Diana. She looked awkward, a little alarmed. She was holding her injured arm close against her. “Or an interventionist Heaven.”

“ ‘There are more things in heaven and earth,’ ” said Gwyn, “ ‘than are dreamt of in your philosophy.’ ”

Kit snorted. Diana looked flabbergasted. “Are you quoting Shakespeare?” she said. “I would have thought at least it would have been A Midsummer Night’s Dream.”

Gwyn’s lips twitched at the corners. “Speaking of dreams,” he said. “You have been in mine, and often.”

I just love those two so much—although that’s not a surprise. I love all her ships😍 (unless there’s one I can’t remember that I hate🤔)

Oh my god and the amount of The Last Hours references I discovered in this book. How did I not see them sooner?!?! Shame on me.🤦‍♀️

“You’re suggesting we burn down Blackthorn Manor?” said Ty, his eyebrows up around his hairline.

“Oddly,” Magnus muttered, “you wouldn’t be the first people ever to have that idea.”

And I’m surprised I never noticed this the first time I read it (or maybe I forgot), but I saw that the Bridget that was in the London Institute with the Blackthorns is the SAME Bridget from TID!!!!🤯

I thought at first maybe it was a descendant of her who had the same name BUT NO!!! It’s the same person!!! That DEFINITELY shouldn’t be possible—she’d be like 140+ years old by now. I checked on Cassie’s Tumblr and it’s confirmed that she is the same person and something happens in TLH that makes her long-lived.

Leave it to Cassie to do something as amazing as that. I want to know so badly now!!!😫

“The legendary Lost Herondale,” said Magnus. “You know, I was starting to think that was a rumor Catarina made up, like the Loch Ness Monster or the Bermuda Triangle.”

“Catarina made up the Bermuda Triangle?” said Alec.

“Don’t be ridiculous, Alexander. That was Ragnor.”

You know, this whole time I thought the Bermuda Triangle was real…… I’m so dumb.😅😂

Ahhh there’s also the scene about family mottos between Emma & Jules that I just loved.

“I wonder what other family mottoes are,” Emma mused. “Do you know any?”

“The Lightwood family motto is ‘We mean well.’ ”

Julian looked over at her. “No, really, it actually is.”

“Seriously? So what’s the Herondale family motto? ‘Chiseled but angsty’?”

He shrugged. ‘If you don’t know what your last name is, it’s probably Herondale’?”

Emma burst out laughing. “What about Carstairs?” she asked, tapping Cortana. “ ‘We have a sword’? ‘Blunt instruments are for losers’?”

“I realized something,” she said. “I want to be like you, Jules. Not this second, not right now, but someday. I want to take care of people, other Shadowhunters, people who need me. I want to run an Institute.”

“There’s nobody else I’d rather be like than you,” she said. “I want you to be proud of me.”

Cassie just LOVES playing with my feelings. I both love and hate her for that. 🥰😭

“Break it in pieces. I give you permission.”