Her story is a phenomenon. Her life is a disaster.

In the real world, Eliza Mirk is shy, weird, and friendless. Online, she’s LadyConstellation, the anonymous creator of the wildly popular webcomic Monstrous Sea. Eliza can’t imagine enjoying the real world as much as she loves the online one, and she has no desire to try.

Then Wallace Warland, Monstrous Sea’s biggest fanfiction writer, transfers to her school. Wallace thinks Eliza is just another fan, and as he draws her out of her shell, she begins to wonder if a life offline might be worthwhile.

But when Eliza’s secret is accidentally shared with the world, everything she’s built—her story, her relationship with Wallace, and even her sanity—begins to fall apart.

“I am LadyConstellation.
I am also Eliza Mirk.
This is the paradox that can never be solved.”

That ending should be torn out, placed in a shredder, lit on fire, and buried in a grave.

Oh, and don’t forget the explosives 😦

Minus a certain scene from the ending, this book was absolutely beautiful and I almost cried reading this.🥺 but im emotional in general, so that doesnt mean anything

“Like life, what gives a story its meaning is the fact that it ends. Our stories have lives of their own—and its up to us to make them mean something.”

Eighteen year old Eliza Mirks looks to be like any other normal high schooler dealing with the anxiety/stress of school and being a total introvert like me . . . but online, she’s also known as the LadyConstellation—creator of one of the most popular webcomics in the world ~ Monstrous Sea.

Everyday goes about the same until she meets the new kid, Wallace, who also happens to be writing fanfiction for Monstrous Sea. After one incident, they slowly start to become more acquainted with another, and so forth with their relationship. 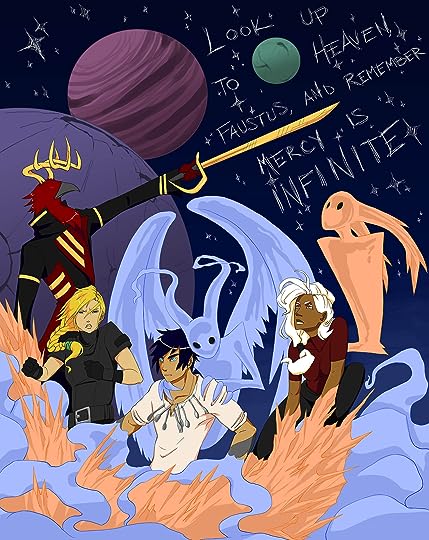 “I made Monstrous Sea because it’s the story I wanted.
I wanted a story like it, and I couldn’t find one, so I created it myself.”

Like many others have stated, I could see myself in Eliza.

★ I don’t hate socializing, but I prefer to be alone most of the time with my books of course hehe.

★ I definitely always overthink the most simplest things that happen because I’m always worried about what the other person will think xD ahhh she’s just so relatable.

And then there were also those times when Eliza would be so absorbed in drawing the next episode for Monstrous Sea that she’d ignore everything else around her, especially her family trying to talk to her . . . and that reminds me of all those times I’d be so absorbed in what I’m reading that I’d do the same thing Eliza does (except not as extreme as losing track of days).

This is a good lesson for me not to do that so much. I can’t help being so into a book though hehe😂

What’s the point of being alive if you don’t do what makes you happy? What good is a career that makes you money if you hate yourself every day you do it?”

Now I was pretty okay with Wallace in the beginning. I did find it a little weird that they’d exchange notes talking to each other when they were right next to the other, but I understand people are different.

Omg but when it was revealed why he’s so quiet and his story in what happened a few years ago . . . that was SO SAD😭 I felt so bad for him, that is just terrible. And after that I liked and understood him a lot more.

BUT THEN THAT WAS RUINED TOWARDS THE ENDING.👿

What he said to Eliza . . . omg no I don’t care if it decides your future and you’re stressed out, you should never demand that of someone when clearly they themselves are dealing with a lot. And nobody in this world has a “perfect life”, even if it looks like it. We don’t know what they’re dealing with and what they had to deal with for their life to look like that.

Ahh I did love the side characters though! Max and Emmy are the best online friends Eliza could’ve asked for. And they’re h i l a r i o u s😂 I love their convos xD

“Apocalypse_Cow: what kind of guy is usually interested in you?

MirkerLurker: The kind I make up in my head.

Apocalypse_Cow: do you want me to go ahead and fill your house with cats right now, or do you want to put that off for a few years?

MirkerLurker: I have to sit next to this guy in homeroom on Monday. What am I going to say to him?

emmersmacks: What have you been saying to him

MirkerLurker: Nothing. I thought that was clear.

emmersmacks: Then continue doing that

emmersmacks: If he wants to say something to you he will

MirkerLurker: Why does a twelve-year-old know more about boys than I do?

I love them.😆 Along with Sully and Church, of course.

And the ending was beautiful, I just wanted to cry. Other than Eliza forgiving Wallace, I loved it.

Ahhhh but I do wish we could see how Eliza decided to end Monstrous Sea. Oh well.😢

“The things you care most about are the ones that leave the biggest holes.”